On the night of 15th July 2016, the so-called/theatrical coup took place, and even though it was at its initial phase and no judicial decisions had been made yet, President Erdogan came out on national television and alleged The Hizmet Movement is the responsible party for what has taken place. He called on the people to go out into the streets and defend their democracy. He targeted the members and institutions of the Hizmet movement as coup plotters, and on that same night, the masses he called to the streets attacked the Hizmet Movement affiliated institutions and, in particular, the movement’s educational institutions. Many educational institutions were set on fire, causing substantial damage. 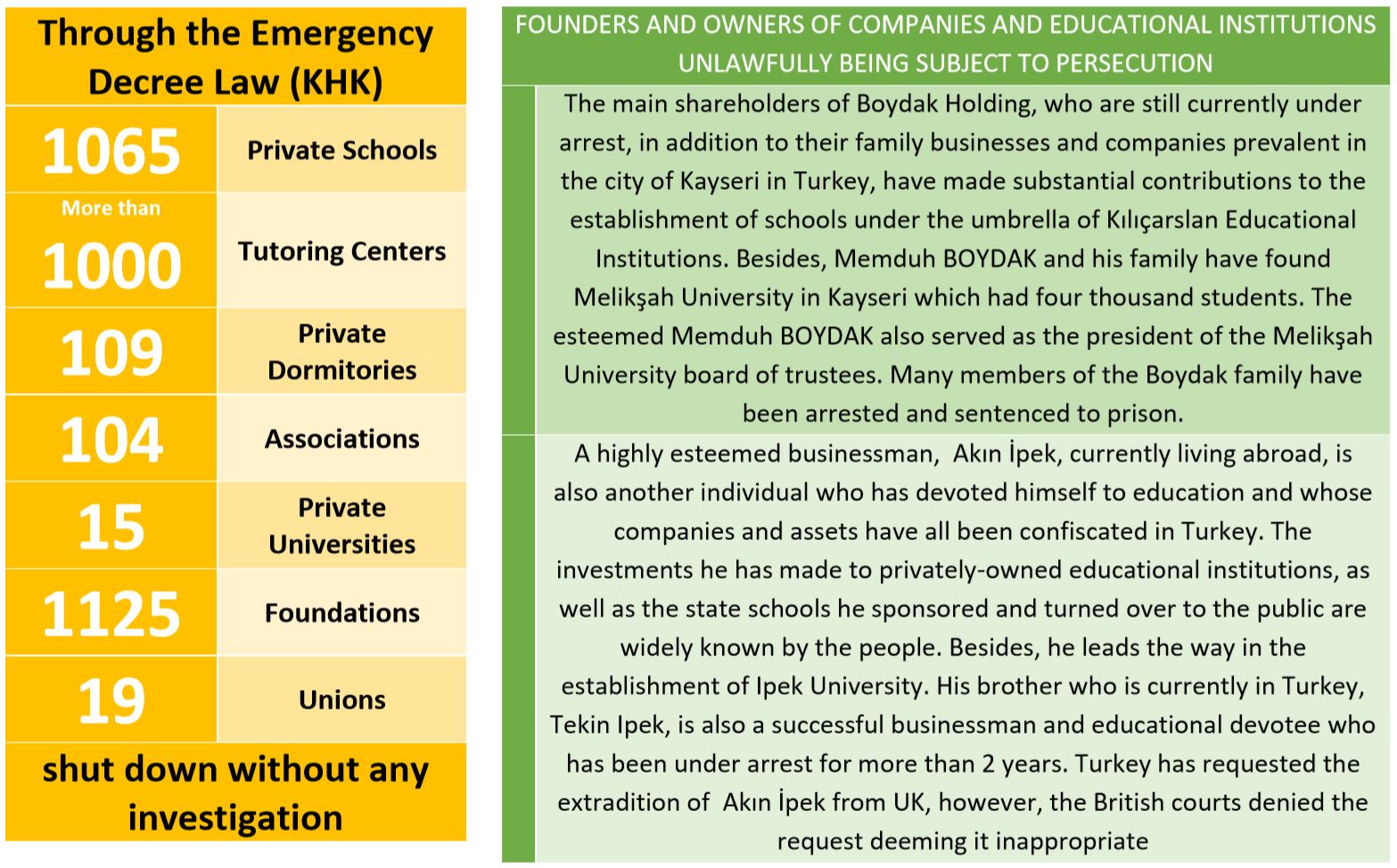 The institutions which were shut down by Emergency Decree Law (KHK) has been turned over to TMSF (Savings Deposit Insurance Fund). TMSF was given the authority to liquidate and purge these transferred companies, should TMSF deem it to be necessary. Through such practice, in other words, by making decisions regarding the personal assets of the shareholders without their consent, the Government has deprived of their right to own property.

An arrest warrant was issued for shareholders of the companies, most of whom were taken under custody and sentenced to 7 to 22 years in prison.

There are several people among the company owners that could not endure imprisonment and torture, went through psychological problems, lost their family integrity, committed suicide, became sick and passed away because they were not able to receive proper treatment.

1. Only due to holding the ownership or being a part of Gulen affiliated schools, hundreds of people have been prosecuted, unlawfully labeled, exposed to false claims to be a member of a terrorist organization, sacked from their jobs, held custody longer than usual, arrested without any predicament and even tortured to death. Constitutional rights should be immediately reinstated. Unlawful arrests and custody should end immediately. Turkish Government should be urged to comply with the international human rights treaties.

2. Teachers, academics, and other employees whose right for an agreement were taken away as their institutions were unjustly shut down and whose employment authorizations were canceled, thereby being restrained from conducting their profession should be rehabilitated. All damages until today, with default interest, should be compensated to them. The unpaid monthly payment of those who have been retired should be paid back, including the severance pay interests.

3. The criteria of compliance with the laws should be met in the proceedings of confiscations of properties due to financial offenses in the eye of public authorities and law. The confiscation of the school owners’ properties should be removed, and the property should return to initial owners. The prohibition of the school owners and teachers to operate should be uplifted without any reservations or annotations. The seized assets of 1,605 private schools, more than 800 private teaching institutions, 848 student dormitories, and 361 other educational institutions, if possible, should either be returned to initial owners or compensated by paying the statutory damages.